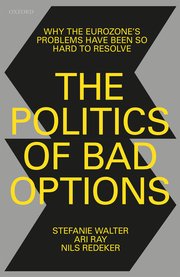 Why was the Eurozone crisis so difficult to resolve? Why was it resolved in a manner in which some countries bore a much larger share of the pain than other countries? Why did no country leave the Eurozone rather than implement unprecedented austerity? Who supported and opposed the different policy options in the crisis domestically, and how did the distributive struggles among these groups shape crisis politics? Building on macro-level statistical data, original survey data from interest groups, and qualitative comparative case studies, this book argues and shows that the answers to these questions revolve around distributive struggles about how the costs of the Eurozone crisis should be divided among countries, and within countries, among different socioeconomic groups.

Rentier Capitalism – Who Owns the Economy, and Who Pays for It? 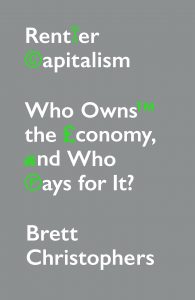 How did Britain’s economy become a bastion of inequality? In this landmark book, the author of The New Enclosure provides a forensic examination and sweeping critique of early-twenty-first-century capitalism. Brett Christophers styles this as ‘rentier capitalism’, in which ownership of key types of scarce assets – such as land, intellectual property, natural resources, or digital platforms – is all-important and dominated by a few unfathomably wealthy companies and individuals: rentiers. If a small elite owns today’s economy, everybody else foots the bill. Nowhere is this divergence starker, Christophers shows, than in the United Kingdom, where the prototypical ills of rentier capitalism – vast inequalities combined with entrenched economic stagnation – are on full display and have led the country inexorably to the precipice of Brexit.

We are plagued by wealth and income inequality, declining productivity, falling investment, and polarized populations. But how are they related? Christophers answers that question, in my view definitively, by showing us how the economy we inhabit is a province of rents protected by power, in everything from finance and patents to carbon extraction and land ownership. Few books come along that fundamentally challenge the way you see the world. This is one of them. Christophers rewired my understanding of capitalism on a fundamental level. Piketty told us that the Trente Glorieuses were a stochastic blip, not a fundamental change. He saw that in the data. Christophers builds upon this insight a theory as to why that is that is both compelling and powerful—that the equilibrium state of capitalism is one of rent accumulation—and that such an equilibrium is a question of class power exercised through the state.
Mark Blyth, Brown University 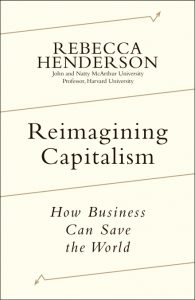 Rebecca Henderson argues that business can simultaneously make a positive impact on the world by confronting the realities of our environmental crisis and the need to address social and economic inequality, while also delivering the sustained economic growth that brings prosperity and wellbeing to society as a whole. Drawing on lessons from companies from around the world who are already making a positive difference, Reimagining Capitalism shows that this new approach is not only a moral imperative but also an extraordinary opportunity to drive growth and innovation in an increasingly competitive world. And, perhaps most critically, she suggests that it has the potential to balance the power of the market with the power of democratic, accountable government and strong civil society – the only long term solution to the problems that we face. 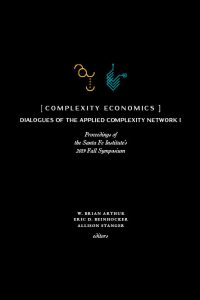 When Santa Fe Institute Scientists first started working on economics more than thirty years ago, many of their insights, approaches, and tools were considered beyond heterodox. These once-disparaged approaches included network economics, agents of limited rationality, and institutional evolution—all topics that are now increasingly considered mainstream. SFI continues to expand the boundary of our economic understanding by pioneering fields as diverse as collective intelligence and organizational scaling. This volume, edited by W. Brian Arthur, Eric D. Beinhocker, and Allison Stanger, includes panel and talk transcripts from SFI’s 2019 Applied Complexity Network Symposium, with newly written introductions and reflections. Representing both scholarly and practitioner perspectives, this book explores the history and frontiers of complexity economics in a broad-ranging, accessible manner.