The Economics of Belonging: A Radical Plan to Win Back the Left Behind and Achieve Prosperity for All 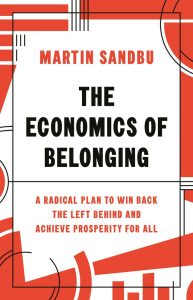 Sandbu demonstrates that the rising numbers of the left behind are not due to globalization gone too far. Rather, technological change and flawed but avoidable domestic policies have eroded the foundations of an economy in which everyone can participate—and would have done so even with a much less globalized economy. Sandbu contends that we have to double down on economic openness while pursuing dramatic reforms involving productivity, regional development, support for small- and medium-sized businesses, and increased worker representation. He discusses how a more active macroeconomic policy, education for all, universal basic income, and better taxation of capital could work together for society’s benefit.

This book offers a cogent diagnosis of the current deep malaise suffered by advanced economies and societies. I find the arguments persuasive and the use of evidence deft. The breadth of coverage of the problems and cures is impressive for such a concise work. With novel formulations and an innovative stress on the issues, The Economics of Belonging is definitely something I wish I had written.
Richard Baldwin, Graduate Institute 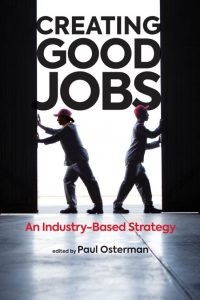 Americans work harder and longer than our counterparts in other industrialized nations. Yet prosperity remains elusive to many. Workers in such low-wage industries as retail, restaurants, and home construction live from paycheck to paycheck, juggling multiple jobs with variable schedules, few benefits, and limited prospects for advancement. These bad outcomes are produced by a range of industry-specific factors, including intense competition, outsourcing and subcontracting, failure to enforce employment standards, overt discrimination, outmoded production and management systems, and inadequate worker voice. In this volume, experts look for ways to improve job quality in the low-wage sector. They offer in-depth examinations of specific industries—long-term healthcare, hospitals and outpatient care, retail, residential construction, restaurants, manufacturing, and long-haul trucking—that together account for more than half of all low-wage jobs. 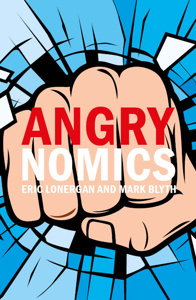 Why are measures of stress and anxiety on the rise, when economists and politicians tell us we have never had it so good? While statistics tell us that the vast majority of people are getting steadily richer the world most of us experience day-in and day-out feels increasingly uncertain, unfair, and ever more expensive. In Angrynomics, Eric Lonergan and Mark Blyth explore the rising tide of anger, sometimes righteous and useful, sometimes destructive and ill-targeted, and propose radical new solutions for an increasingly polarized and confusing world. Angrynomics is for anyone wondering, where the hell do we go from here?

In a series of brilliant Socratic dialogues peppered with a score of real-world stories Lonergan and Blyth explain the roots of our current anger – anger over austerity policies, job losses, stagnant wages, million-dollar salaries for the few, broken health systems for the many. But also anger about an economic ideology and political system that seem to ignore people as they are. What to do next? How to reset the system? Never were the answers to such questions more urgent.
Branko Milanovic, Graduate Center, City University of New York

Anti-System Politics – The Crisis of Market Liberalism in Rich Democracies 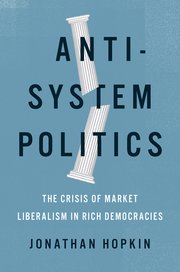 In Anti-System Politics, Jonathan Hopkin traces the evolution of this shift and argues that it is a long-term result of abandoning the post-war model of egalitarian capitalism in the 1970s. That shift entailed weakening the democratic process in favor of an opaque, technocratic form of governance that allows voters little opportunity to influence policy. With the financial crisis of the late 2000s these arrangements became unsustainable, as incumbent politicians were unable to provide solutions to economic hardship. Electorates demanded change, and it had to come from outside the system. Using a comparative approach, Hopkin explains why different kinds of anti-system politics emerge in different countries and how political and economic factors impact the degree of electoral instability that emerges. Finally, he discusses the implications of these changes, arguing that the only way for mainstream political forces to survive is for them to embrace a more activist role for government in protecting societies from economic turbulence.